Not Just Another New Year

5…4…3…2…1…Happy New Year! We kiss, we embrace, we sip wine with bubbles. We awake later that morning with a headache, perhaps, and enjoy a late brunch and a day off. On January 2nd, life as we knew it continues on.

That’s pretty much how the transition of one year into another goes for a lot of us. But then again, sometimes the New Year is not just another new year. This is certainly evident in the snowfall – the substantial snowfall – Ponte Winery experienced on New Year’s Eve. This was no “dusting” of snow but rather enough to really coat the ground, the greenery, the grape vines and the mountains beyond. Simply put, it was enough to build a big snowman. As one now living in Pennsylvania, I admit my first reaction to all the photos I saw of the snow on social media was a chuckle and a patronizing “They’re so cute.” But, seriously, this kind of weather is a very big deal for southern Californians and I imagine many memories were made that day. Meanwhile in PA, there was no snow on New Year’s Eve. Just freakin’ cold. 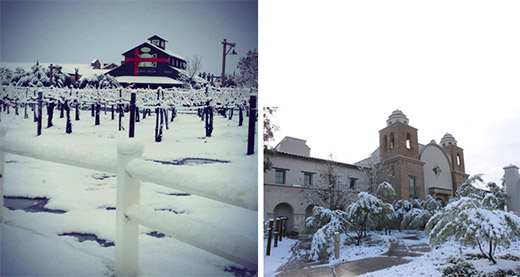 “But isn’t this kind of weather detrimental for the vineyards?” some people asked. Absolutely not! Quite the contrary; snow helps dissolve salts in the soil and induces dormancy in the vines. The snowfall tells the farmers at Ponte that they’ll have a great harvest next fall which means great wines for you! Plus, melted snow means water, a very precious element for southern California, now more than ever.

So, 2015 already isn’t just another new year for Ponte and Ponte Vineyard Inn. They, of course, continue to give their guests and Members the best day in the country they could ever wish for, which was and will always be Ponte’s core mission. But new things are also on the horizon and we can’t wait to share them with you. Please continue to share your suggestions with us! If it wasn’t for those and your support, Ponte surely wouldn’t be where they are today. 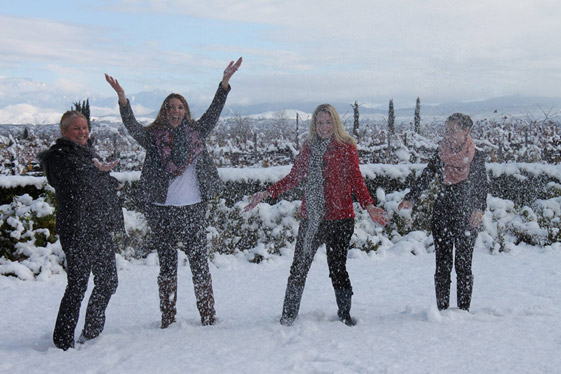