How do you know if landscape plans are any good? How do you spend thousands on trees and hardscape without being sure of your design? The answer is you don’t guess. You lay out the garden and see how it works full scale.

This last Saturday, our builder Steve Converse “drew” the garden design directly on the dirt, between the wings of our almost-complete wine country hotel. Paths, seating areas, fountains, fire-pits and arbors were located, and painted using different colors. Then we walked around the hotel looking at the future garden. The verdict? The garden design was generally very good. I think you are really going to like it. 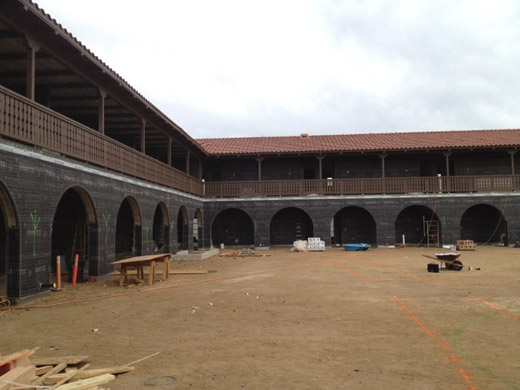 Note marks on the dirt (orange for paths, green for tree canopies)

We decided to move the large pepper trees on the four corners outward to improve the view from the lobby areas toward the vineyard. We also increased the width of some of the paths, enlarged or reshaped the seating areas around the fire pits, and relocated some trees that blocked some views of Temecula wine country from the second floor rooms. 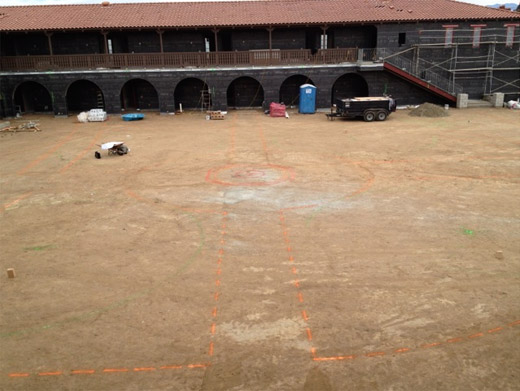 The fountain and pepper trees (wood blocks) are located. Yes, the blue porta-let is temporary!

We also confirmed that the trees would not block the solar panel locations and that the ones on the west side shaded the rooms, without blocking the views. We also decided to plant more vineyard closer to the rooms on the winery side to soften the view and get the rooms closer to the vines. 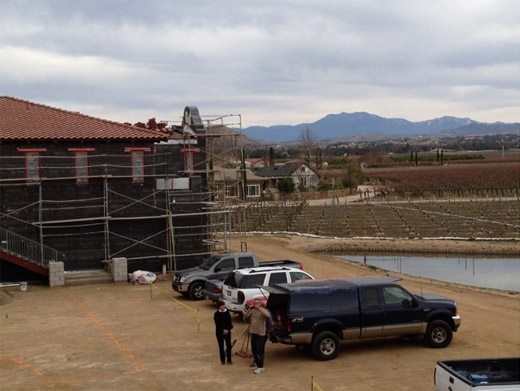 Until next update, thanks for your support and see you at the inn.